Raymund and the Fear Monster 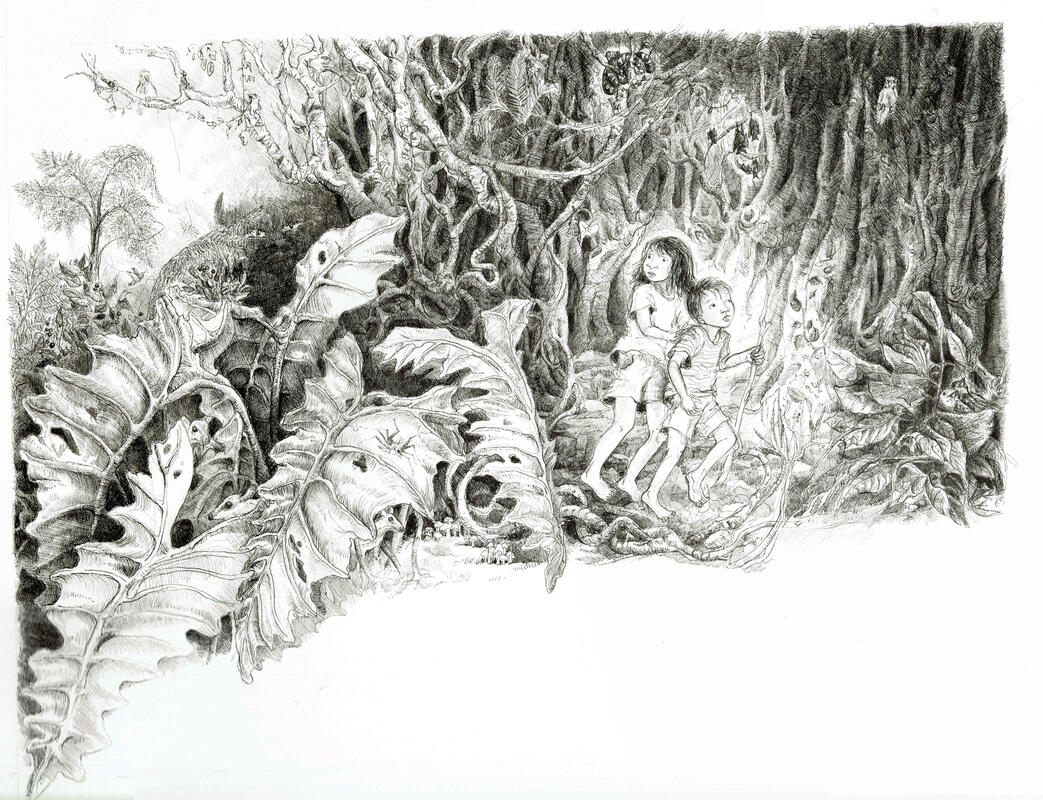 My fellow writers' group member, children's book illustrator, Ester de Boer and I finally put into action our long-discussed plan to co-create my story Raymund and the Fear Monster. Ester has "ferociously coveted the job of illustrating this one, as the message is so true and practical."

​This story was inspired by the children that I met while volunteering in a Philippine orphanage. Raymund teaches that being courageous isn't about feeling brave, but stepping out when you don't.

Ester is a special needs teacher, and she has informed me that she is excited "about a children's book that actually teaches proven strategies for managing anxiety in a book which (WE PROMISE!!!) will not look like a community health brochure."

And it doesn't. It looks amazing.
Blurb:

At the top of an enormous mountain is a dark and gloomy forest. In the dark and gloomy forest lives a monster who roars and growls and makes terrible noises. Raymund lives in a small village at the bottom of the enormous mountain. Raymund is scared of many things. But, most of all he is afraid of the night, and the monster that sends him running to hide under his bed. How will Raymund face his fear, discover what it means to have courage, and defeat the huge and hideous monster that smells like fish guts, rotten eggs and smelly feet?


Why did you write Raymund and the Fear Monster?

In June of 2013, I went on a Mission trip with my church to Ilocos Sur Province in the Philippines. It was in Cabugao that I visited the Spirit and Life Mission House orphanage.  I really connected with the children and started writing to them when I returned home. I wrote (and wrote for a long time) short stories that entertained and encouraged the children.

We planned to make a return trip in December 2013 to January 2014. I wanted to do something very special for the children. The story of Raymund and the Fear Monster was written for the younger children of the orphanage, to encourage them to face their fears and overcome them.

​I visited the orphanage and I presented them with Raymund and the Fear Monster. I had illustrated the book (not brilliantly) and printed it out as a hardcover photo book. The looks on the faces of the children, and their exclamations of delight, made it all the hard work worth it.

In recent communication with one of the workers of the orphanage, it was revealed that they still read Raymund and the Fear Monster regularly, and love it. As one of the children is named Raymund, they all look at him when the title is read. They understand the message of what the story is about. I can't reveal what they actually say... as River Song from Dr Who would say, "Spoilers."

Why do you want to publish Raymund and the Fear Monster and make it available for a broader audience?

As I spoke to children, parents, counsellors, teachers and psychologists, I realised that this story resonated with a great number with many asking for a copy as soon as it was published.

Fear is such a typical part of our existence and it crosses all barriers: social, age, and cultural. A small amount of fear is healthy. But a great deal of fear can cripple you to the point where you cannot enjoy your life, and you just exist.

In the area of southern Victoria that I live, it has had its share of natural disasters, and man-made. In 2014, the Morwell Open cut Coal Mine caught on fire and sent thick coal ash choking Morwell and the surrounding towns for weeks. In the November 2016, the owners of the mine announced the closure of the mine and power station. Nearly 1,000 workers lost their jobs by March 2017. We live in the highest domestic violence area in the state. Many are afraid of what this news will do to families, and the wider community. Fear is growing. Many are asking, 'What can I do?'

There are many things that you can do with fear. One thing is to learn to understand it. It's not in itself a bad thing. We do need to learn to deal with fear as it arises. Raymund and the Fear Monster includes a few proven strategies to calm a child and help them move forward despite feeling afraid. And it's all wrapped up within a fun and entertaining story. Children, and adults can learn to face their fears and live a courageous life.

I am familiar with fear as I lived with fear most of my life. I grew up in an abusive home. I lived on the streets for two years as a teenager. I have also lived with a serious illness for over 14 years. I know what to do when fear rears its ugly head, and I long to share what I have learned with others. Today, I enjoy my life and look forward to everyday.
Raymund and the Fear Monster won third prize in the 2014 Churchill and District Story Writing and Poetry Competition - Writing for children division. ​
Follow the progress of Raymund and the Fear Monster