The Publishing Journey of 'Raymund and the Fear Monster 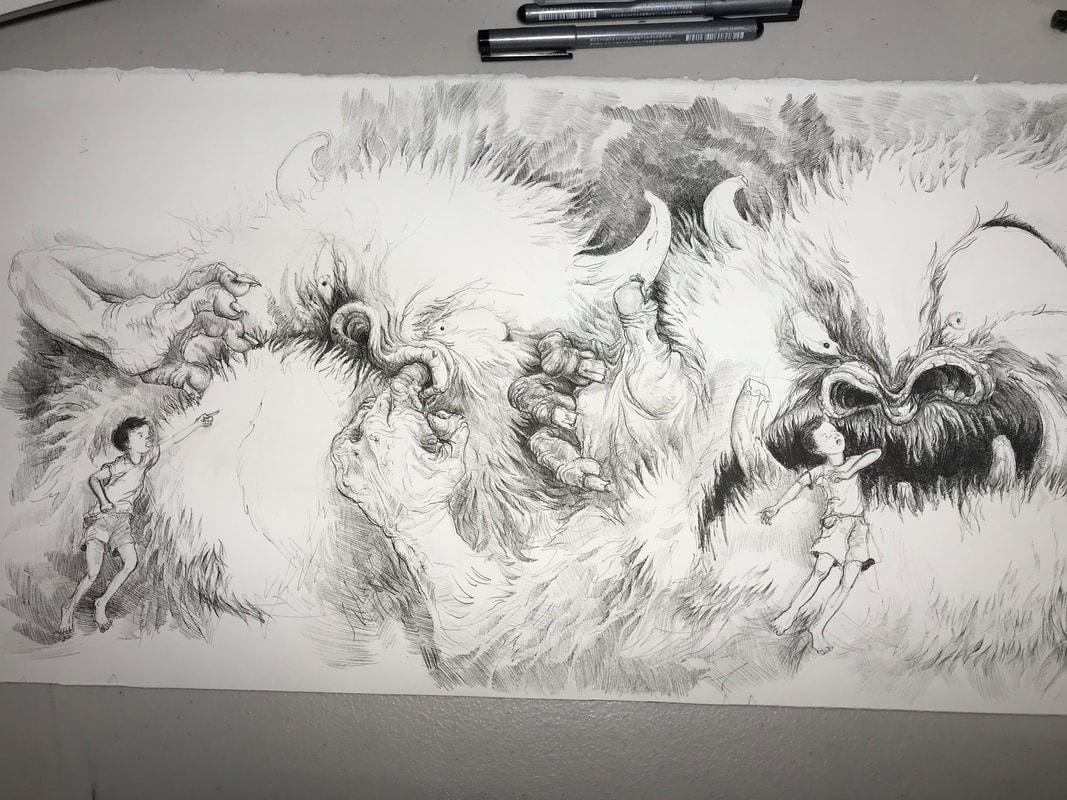 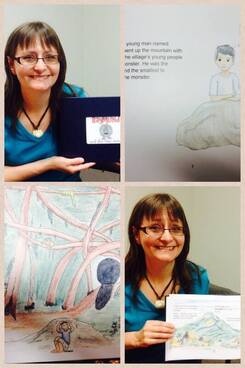 I wrote the story for children in an orphanage in the Philippines who I met in June 2013. I illustrated the book and put it all together. I printed out four copies as a Photobook through Officeworks. January 1st 2014 I gave them their copy. (They read it right up until someone decided they liked it so much they took it when they left the orphanage in 2018).

I put Raymund and the Fear Monster away on the shelf. It was done! Wasn't it?

I talked to parents about my story. I read it to them. I entered into conversations about childhood fears and the parents expressing a desire for more books with strategies in them, but not a self help book for kids with bad pictures, but a fun book that would draw them in. I started re-working ​Raymund.

Put Raymund on the backburner for awhile. Worked on other stories. I felt I needed some space and I also needed to learn the craft of writing.

I completed a Writing Picture Book course through the Australian Writer's Centre. I wrote a different version of Raymund ​that fit with the current picture book format.

I wanted to throw up on Raymund and never lay eyes on it again.

I came across Jen Storer's post Right Story, Wrong Format. I also attended my writer's group meeting where we learned about dialogue. There I worked on a piece of dialogue from Raymund. Light bulb moment! I went home and re-wrote ​Raymund and actually started feeling excited about it again. Okay. There was a happy dance and squeeing involved. 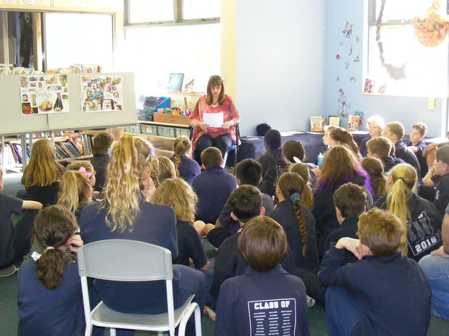 I had the wonderful opportunity to present the new and improved version to students at Kosciuszko Street Primary School. They loved it and wanted more. Yay!

Ester and I feel that Raymund is ready to meet the world and we discussed self-publishing options. 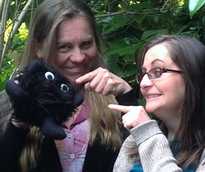 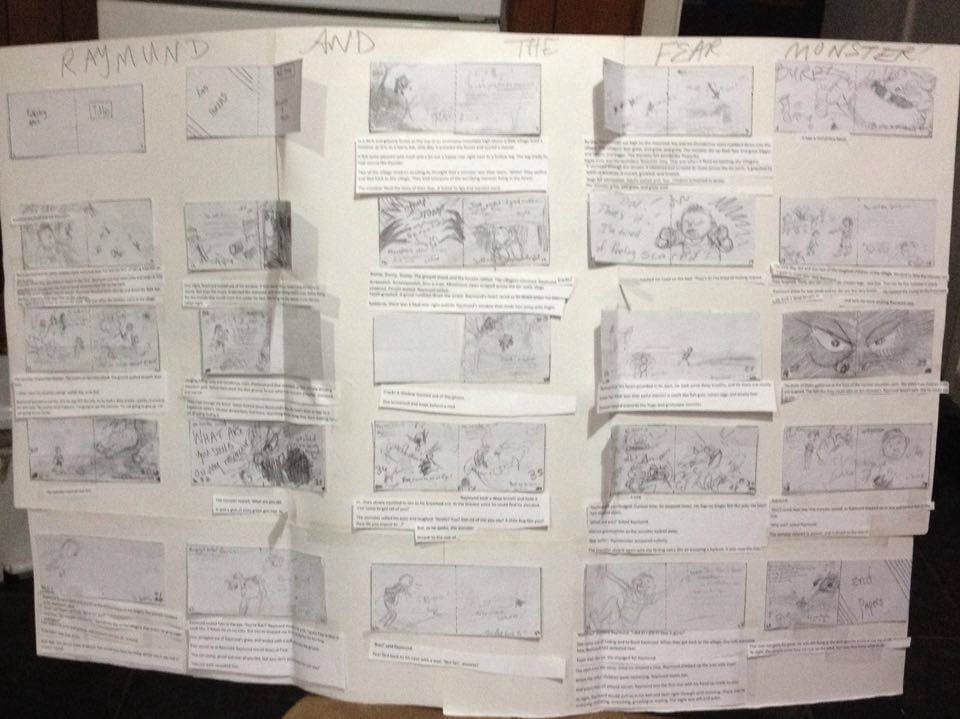 Ester and I take Nina Rycroft's illustration Masterclass eCourse.
We also discuss what style she would use for the illustrations. We settle on one. Happy days! 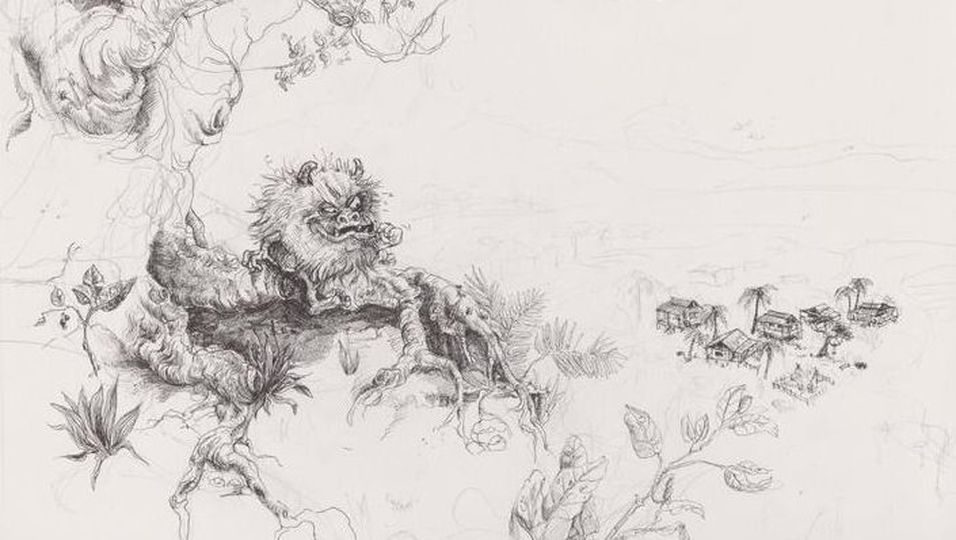 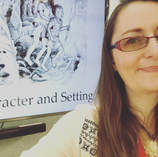 ​I've been busy running writing workshops at a local primary schools and have been using the illustrations and text from Raymund and the Fear Monster in the introduction slides. ​

Ester is still working through the illustrations. There are so many!
​

Ester has worked like crazy over the past few months. 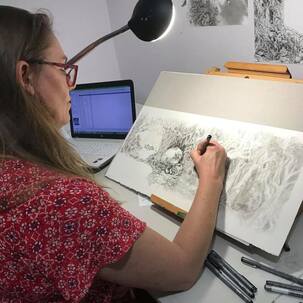 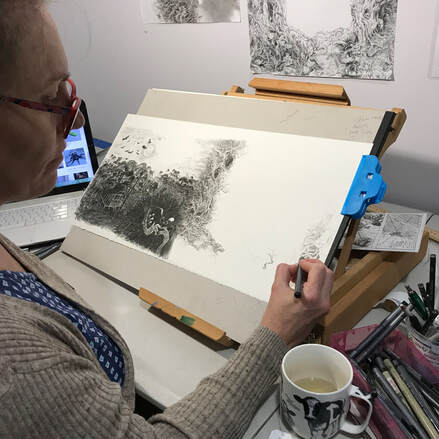 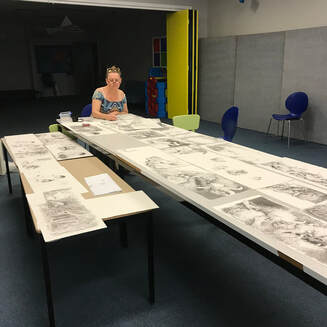 final tweaks on all the illustrations..

and then some subtle touches of colour... 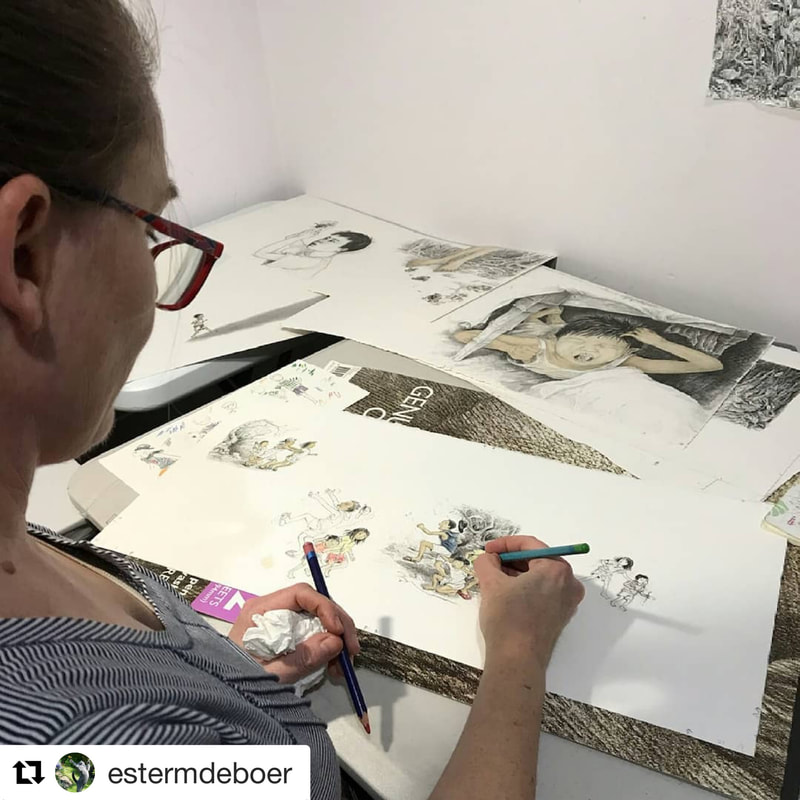 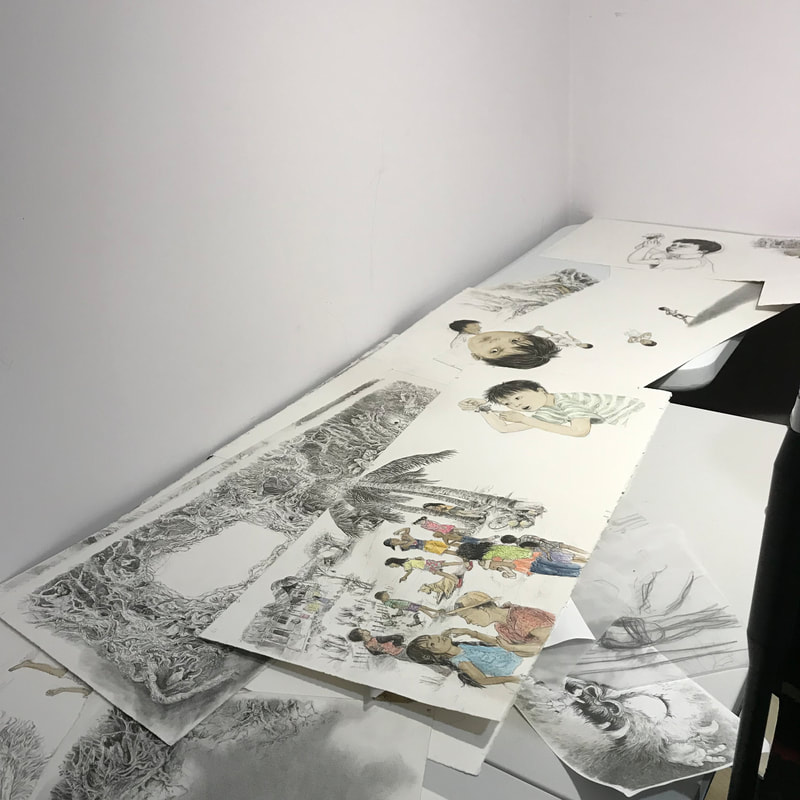 Then it will be scanned and off to the lovely people at Book Cover Cafe to work their magic to put our book together. ​​

Work has begun on putting Raymund and the Fear Monster ​together. The cover first.

Ester has begun work on the teacher resource pack to go with our book.

First round of cover designs. Not really capturing the feel of Raymund. Back to the drawing board.

Next round of cover designs. Getting closer.

Another round of cover designs. These look promising.

We have a cover! Yay! We had the promo cover by the 9th July. Now on to the internals. 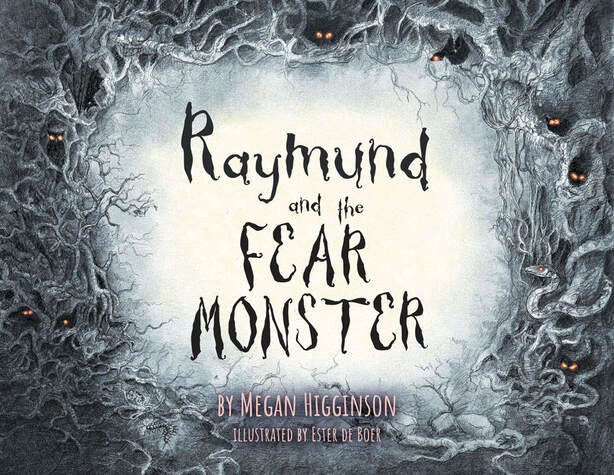 We get back the first round of revisions for the book typeset . Let's just say there was a lot of work to do. Yes! That was my face. 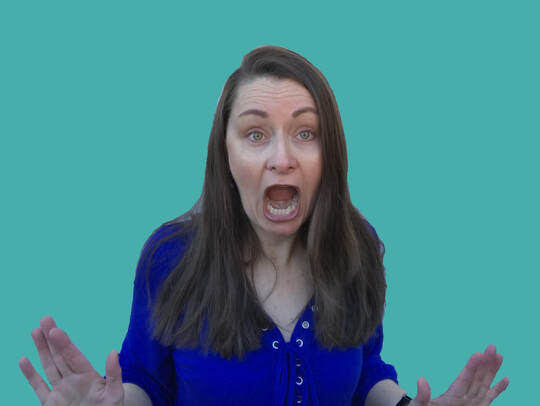 After several rounds of revisions we receive the finals. Phew. Now the back cover.

After a few revisions...

We had always planned on a 48 page book with end papers. After a few days of the graphic designer finalizing some things, and me asking IngramSpark about printing our sized book, we found out we had to make a 52 page book. No end papers. Sad face. The illustrations have been included though. However, they are available if in the future we decide to go with offset printing.

Received all the files ready to upload to IngramSpark... and then my health took a dive. Uploading will have to wait. 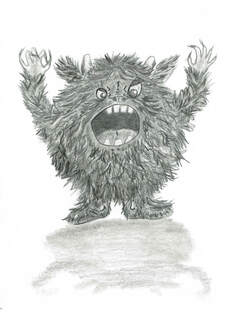 Today was the day. A kind friend uploaded the files and filled out all the information for me. Woohoo! 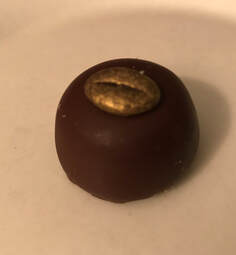 Ordered proof copies. Celebrated by eating a piece of Haighs's chocolate which I'd been saving for this occasion. Yummmm. Coffee dark chocolate.

Received proof copies. We had to go out and celebrate. We started seriously talking about the book launch as we now have the physical copies in hand and it doesn't take long to ship once printed.
We pop around to our one of our local bookstores who has followed our journey from the beginning and show her our book. We now have a timeline and a date for the launch, and a where.
There was a misprint with the paperback and I had to report it and get it reprinted.
I hit the distribute button on IngramSpark for the hardcover so it will be distributed online over the coming weeks. This book will be available in just about every English speaking country in the world. 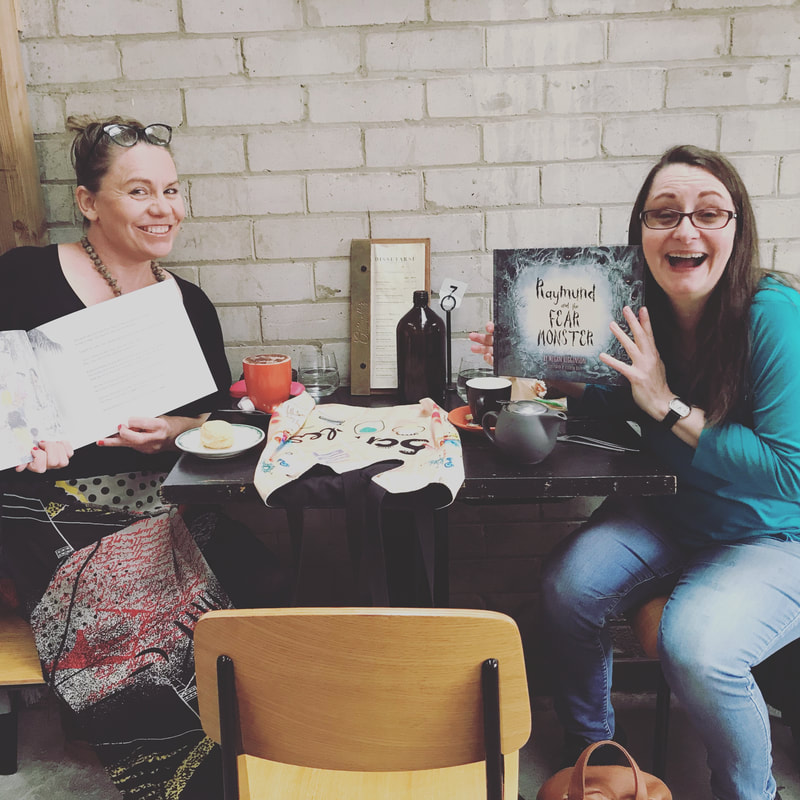 The paperback proof arrived and is perfect. Hit the distribute paperback button on my IngramSpark account.

Just waiting on some money to come in for preorders and then we can do our first print run.

Hit publish for our first print run. 100 in total. Just enough to cover the preorders and a few for the launches.

Ester is still working on the teacher resources. It's going to be a great package. And it will look fun too.
​
And I have begun to answer questions for some upcoming interviews for the book blog tour.

Today I had the opportunity to read Raymund and the Fear Monster to some young students at Morwell Central Primary School. They gasped, laughed, and giggled in all the right places. As a surprise for the students and teachers, Ester came too. We showed them the book trailer which the amazing Romi Sharp had created for our upcoming book tour. We also announced our 'Draw Your Own Fear Monster' competition. We left them filled with excitement and drawing furiously.

Sign up to stay up to date, get notifications, and free extra's about Raymund. ​