​Megan loves books that catapult her into space or lead her into strange and fantastic fantasy lands. As a child and teenager, if she could have combined reading from horseback while galloping along Mackay’s beaches, or while mustering cattle in the Queensland outback she would have. These days she loves to write stories of monsters, aliens, and mind-blowing places.

Illustrator bio: Megan Higginson lives in her own superhero hideout in Latrobe Valley where she scribbles and paints. Megan has always drawn since she was a kid but never felt she was good enough, until she decided she was. So, she put on her princess crown and superhero cape, and since then, dragons haven’t been able to keep her away from her brushes and paints.  'My Princess Wears a Superhero Cape' by Melissa Gijsbers is Megan's debut book as an illustrator and came out in March 2021. 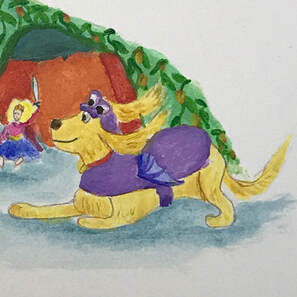 A closeup of an illustration from 'My Princess Wears a Superhero Cape' by Melissa Gijsbers and being illustrated by me, Megan Higginson
The Long Bio:

I was originally from North Queensland. I grew up in Finch Hatton (population 600). It is sugar cane country nestled at the foot of the glorious Eungella Mountain Range; the home of misty mountains, the elusive platypus, and stunning tropical rainforests.

I attended a small country school where it was okay for the boys from the cane farms to wield power tools in art class, and class sizes were fifteen to twenty children. When I was thirteen, my mum, my sister and I moved to Mackay’s sunny beaches.

I have always been an avid reader of books from all genres, but I especially enjoy sci-fi and fantasy. As a child and teenager, if I could have combined reading from horseback while galloping along Mackay’s beaches, or while mustering cattle in the Queensland outback I would have. (Of course, I would have not enjoyed the thrill of adventure if I’d had my head in a book).

From my perch up a tree, I would devour Black Beauty, and Tolkien’s Lord of the Rings and The Hobbit. I could never get enough of Enid Blyton’s Magic Faraway Tree, The Wishing Chair, and Naughty Amelia Jane. They made me imagine that the grotto in the rain forest might be the home of some fairies, or a gateway to another realm. Or that my toys might come alive when I left the room - I’m pretty sure that my toy monkey was alive.

However, reading has not always been easy. I have dyslexia, as does my mum and my sister. I remember having trouble reading and Mum helping me. The words would take on a life of their own and swirl about on the page. For ages I put a ruler over the writing above and below where I was reading, and I would follow my mum’s finger along as I read out loud. Eventually it ended up being my finger I followed as I wanted to read longer stories.

I also remember spending hours practicing and practicing writing and spelling words, constantly getting my b’s, d’s and p’s mixed up. I still do sometimes. I eventually got there, and then my head was always in a book. I was known as The Bookworm of the family. I still get the odd book that the words look like they are swirling over the page. Or my eye picks up a word from the sentence below or above, but these days it happens infrequently, or I'm so used to it that I correct myself and I don't notice.

Growing up I always thought I was dumb and stupid. I was constantly misunderstanding instructions, especially when it came to story writing at school. I would come at the story from a totally different angle. I would also end up embarrassed as everyone read out their stories, and I would realise that I didn’t do what was expected. Let’s just say I had a very active imagination. I was a very shy and quiet child and spent a lot of time making up characters that would talk to each other and go on adventures. Personally, I thought I was nuts. So I never mentioned it. I now realize that this is what writers do.

The last several years have been an amazing journey of personal growth, and a growing realization that I am a writer; a teller of stories. I had often written stories down, and occasionally entered them in local writing competitions. Even though I won prizes I never took it further than that. Now that I am writing seriously and doing whatever it takes to get my stories into the hands of children, I am having a such fun writing the many stories that have been floating around in my head and pinning them down on paper, as well as writing many new stories.
​
The ideas for my stories are often based on my observations of the people and the world around me. My children and animals inspire me, so facets of them at different ages end up as characters in my stories. I love to write stories that are mostly about children learning new things about themselves, the world and people around them. Weird creatures do tend to end up in my stories too. I am an avid reader of science fiction and fantasy, so these tend to influence what I write for older readers. I do read more widely. I have read wonderfully written historical novels, true stories, and countless children's books for they are such fun.

I am passionate about helping children find their 'magic' book, the one that get's them wanting to read, even it they find it hard. I love to inspire children to want to read all different types of books, and to have a go at writing their own stories. 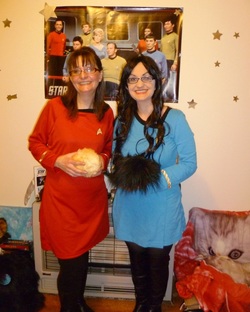 My daughter, Ashlyn and I at her 21st Birthday Party.
I currently live with my wonderful adult daughter, Ashlyn, two mental, anxious and crazy fluffy cats- Miss Kira Fluffbutt and Miss Larna.
​
I also live with multiple chronic illnesses. However, this does not stop me from pursuing my dreams of writing and illustrating books.
​
Beyond all that, I love chocolate, drawing and painting, hanging out with friends and family, hot summer days, walking in the bush, horses, pottering around my garden, and reading a great book.

Other places to find me on the web: